A Critique by Carl Anthony Straus of Peabody Massachusetts USA 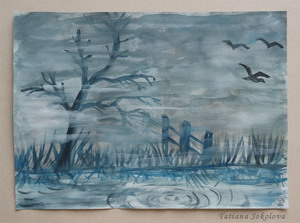 Here, as mentioned by the artist in her own memento of the inspirations that drew this greatly-executed work out of the dark recesses of her mind, it was a very "strange summer", perhaps an eerie and outright scary one, at that! This great artwork reminds me of the great classic mystery horror film, "The Fog", with American actress Adrienne Barbeau as its" main, enduring, heroine character. Just as in this salt-marsh-like scene of a dismal, haunting, blue-gray pallor, with a thick blanketing fog rolling in on a small coastal community, this stark and mysterious image has the same creepy undertone of the movie"s seaside setting. In the movie, as in the artist"s mind... there was something very odd and unsettling about this frightful vision. Something was surely amiss, every time the fog would overwhelm the town, and people would turn-up missing... or dead. No-one had any clue what was happening to the town"s missing citizens, and it seemed that only the birds in flight may be safe from its" dark and sinister secrets. In the end, the dark, departed spirits that freely roamed in and out with the fog were finally satisfied when they got the victim they had so eagerly longed for, which allowed them to give the whole haunting thing an eternal rest. It appears that the spirits were quite satisfied having been satiated by their heathen blood-lust for the descendant of the man who was responsible for all of their deaths at sea, causing them to seek temporary atonement in their killing of the others, until their restless souls could finally feel justified, vindicated, and released from their roaming, forever to rest from their grisly wanderings. It was quite a movie, and this is quite a painting. It was done, like the movie, birthed in a few creative and fearful minds! The mood is the same, on canvas or film. It is the fear of the unknown and unseeable things that may come around to haunt us, to frighten us... to come in with the fog... to render us DEAD!!!

"People are a complex of contradictions". ~Tatiana 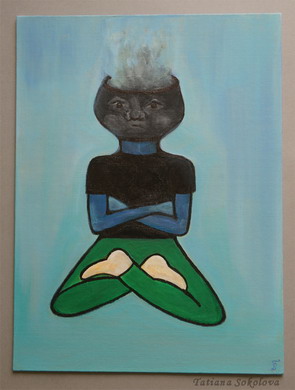 Here is a simple and seemingly featureless image of a man, devoid of any distracting background or detail. The artist"s own comment gives us a clue on what is the whole point of this masterful and very conceptual artwork. Tatiana here is not so much concerned about the man"s surroundings, or even his status of wealth, virility, or anything like that at all. She is merely focused on understanding what he has on his mind, and how he thinks, and why he thinks such. She ponders what his misty if not smoky or smoldering thoughts really are. Is he thinking deeply and critically, or is he confused and befuddled as he looks back at her... never quite knowing the mind of a woman either. It"s a lovely paradox, and a tragic divine comedy all rolled into one. Will men and women ever really learn to understand one another, or will they just sit back and stare, as they wonder what vague and smokey thoughts each other manifest. The man is thinking, of that we can be assured, just as when a percolator is brewing some tincture or refreshment. If only she knew, as easy as determining coffee from tea, but to read the man"s thoughts is almost never correct in her guessing. Her thoughts and ideations to him are mysterious as well... her true feelings he cannot easily comprehend either. But the man and the woman throughout all history keep coming together, often in spite of their mutual misunderstanding and seeming inability to blend perfectly at all. Like water thrown into hot oil, at times nowadays it seems that the sexes don"t mix well for very long, before separating... going their ways in adversity and diffusion. Such is life, in our relational universe of misconceptions.

"Sometimes we all find ourselves somewhere on a road. We need to take a time and realize where we are and where we"d like to go." ~Tatiana 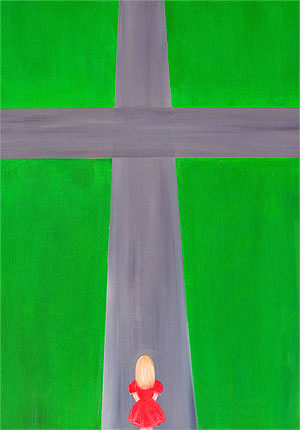 Here is a way, a simple yet most important crossroads in life. In this simply-rendered artwork, it posits many questions in our observer"s minds. Is this the way to matrimonial choices, with several options laid-out before her? Is it the way she is contemplating going with her majors for her studies, to major in a particularly challenging and potentially rewarding field of study in college? Could it be the way to deciding to bare children or not? Could it be even inquiring how many feel right to the woman? Is it the way to fast-track a profitable and satisfying career for her own good? This way is just that, and only that. It shows none of the trappings nor rewards or regrets of her choices. It does not peer-out into the distant reality of result or conclusion. Can this be "the way", the ultimate way in any of our destinies, as we contemplate matters of faith? What shall we put our faith and trust in... an idol carved by our own hands that we carefully transport in our camel"s backpack, a personal God made of wood or stone and gilded with gold or covered in paint... or even a character long dead in their grave? Perhaps, like countless other saints throughout mankind"s history, she may follow the gracious path that leads to the one true God, and his redeeming, saving son Jesus, "The Christ", both surname and title. Does she kneel before the cross of Christ, or before a mere cross in the road? Only Tatiana can answer that question there, within herself, in the silence of her heart. We pray that she makes all of the right choices... for this life, and the life yet to come! AMEN!!!

"When people ask me how do you do it, I have four words for them. They are written above." ~Tatiana 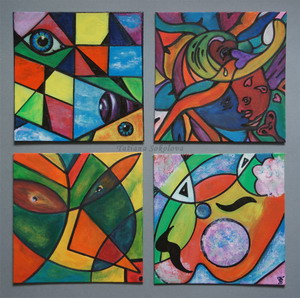 Here in this quarterniary treasure are 4 great works of art revealed. The top left mini masterwork so ably displays the imagery inspired by the first word of its" more-than-pregnant title, "Look". In this full-term and very robust nomenclature are many secrets of the quadrilateral concepts foreshown. The feeling I get when I look at "Look" is one of keen observation, of caution and discernment, with an eye (or two) toward security. The general feel of this great quadriptyche panel is one of distrust or of seeking merit. It has both a glaring stare and a more subdued and even comforted look, and a third eye that seems to be totally trusting, as it feels comfortable enough to even look-away.
The second great and very expressive art entitled "Feel" is perhaps one of the most moving representations of feeling, like the deep embrace of grief among loved ones or a dearly departed or greatly plagued soul of fond communion. Here we see three people holding each-other so tight that they seem to interlock like pieces of a puzzle, cemented together. A trail of sad red heartfelt tears stream from the people"s eyes, while a purple heart emerges from their midst, a symbol of their deep feeling of woundedness and punishing loss. Even the overall spirit, portrayed like a mourning-dove here, with tear-shaped eye and down-winged countenance appears central to the mood of such tragic emotion. The man in the right lower foreground has a heart that seems to want to tare in two and take flight from his very chest. Perhaps the redness of his face indicates the elevation of his blood pressure as he seems hardest-hit by his terrorific grief. A better pictorial representation of the highly-charged and deeply-rooted, lingering, unquenchability of feeling in such a case, there may never, ever be. Others appear to be going virtually numb from feeling anymore, which affect a terribly deep-seated grief has on many who experience it.
"Think" is precisely represented here by the very manner of the face we see in this tertiary segment of these great companion works. The head tilted akimbo, chin out, and with eyes narrowed make it obvious to us, the viewers, that there is definitely something serious on this androgenous character"s mind. We cannot tell if it"s male or female, or even human at all... it almost looks like an avian being, clad with bright plumage and beak, but that is not the artist"s point... he, she, or it is simply "thinking" about something... something that may never be revealed... a subject that may never come to light, as what"s on this being"s mind is simply not her subject matter... just the idea that it gives birth to thought is all the artist had intended here. It causes us to think, and then to just accept the creator"s intended subject here... just "Think" of that, and let it digest awhile... what do you think???
"Paint", the final image here in the concluding oddysey of the quarternian treasures of this talented and mighty artist is a fabulously rendered painting executed by Ms. Sokolova, potentially a playful and very zany portraiture of a man, or "the man", in her life. He is a mustachioed, noble, and very gallant, "dapper-dan" dandy of a special man. He is painted in joyous living color, with all the colors he brings to her heart and with the light and brightness he deposits in her spirit. Could it be her own father, her marital partner, or romeo lover? She may never reveal more about this bright-eyed, smiling, happy-go-lucky man to us anyway. Part of any geat artist"s intrigue is to leave us with many questions, so as to look, think, and feel, as we paint our own canvas called life!

"I will take brushes and paints. Spots will live their own life. I will give them body and face. Grey day"s better when you fantasize." ~Tatiana 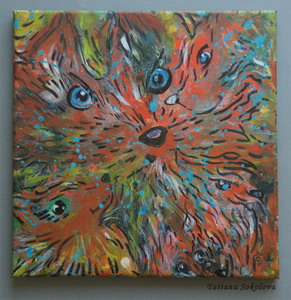 Here is as much life as in a fox"s den, with young eyes peering-out from everywhere, with the serious stare of the mother fox and the counterpoint of the green-eyed, happy-go-lucky, carefree, and very playful gaze of one of her kits. In this den, Tatiana"s "spots" come to life... with vigor, as they lift right off of the canvas, as they take on a veritable form of life themselves, and seem so alive with colors, forms, anima, and movement. Mothers always worry, day and night, about their precious, guarded, personal treasures... their many offspring youth. It is no different with foxes than with human moms. They all want to know who may be approaching their children, and so they keep a sharp eye-out fo predators of any sort, whatsoever. There are many other eyes watching us as we gaze into her matronly domain, but none that have as intense a focus upon us, and with her repelling gaze she may frighten us off, if we know what"s good for us. It is a warning look, a virtual "shot across our bow" before utterly sinking us! We must never come between any mom and her precious babies. What could even the tiniest mother bird do to the grandest of eagles who wrongfully approach a mother"s nesting chicks. The word ferocity best describes any mother"s will to protect her every progeny. The most-seemingly insignificant, but protective little-mom can become like our worst nightmare, or the vilest and most threatening demon from the very pit of Hell when provoked... especially where her children are concerned! To dare attempt to enter her den, lair, nest, or home unannounced is to grab-hold of Satan"s very tail and yank it hard... WATCH OUT!!! She"ll come at us like a thundering freight train, full-speed ahead! Damn the torpedoes, and take no prisoners! She will come ALIVE, and get us!!!
Like our illustrious favorite artist here, I have taken liberty myself in this critique, to fantasize as well! :-)