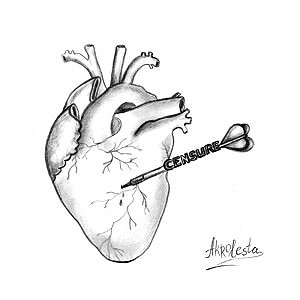 Mary looked luxurious, as always. Her fury went well with her business suit. She was a vice president of a small but reputable publishing house.

Mary was not a connoisseur of literature, but she was good at selling and knew what could and couldn’t be sold. She knew how to make an agreement with the author, how to advertise a product, how to deal with a statement of claim.

Only business connected her with literature, and also with John, her boyfriend, who considered himself a writer.

John was tapping on the keys on the second floor of their modest house, which leant the walls on the neighbors" houses, but at the same time had a small backyard where you could have a Saturday barbecue, take sunbaths and keep old rubbish.

“Okay, okay. I can write some action. For example, how the Israeli Olympic team was taken hostage by terrorists in Germany”.

“What kind of terrorists?”

“You"re out of your mind! Do you want me to lose all Muslim buyers?”

“Oh, well. What about a book about an elderly Kentucky slave, about his hard life. Readers will feel sorry for him”.

“It’s good. African Americans make up a large percentage of our readers”.

“Then I will write about the Negro Tom!”

“It won"t work without "niger". The slave owner will not shout “Hey African American!” He will say, “Hey Niger.”

“Okay then. They all be white. I will write about an architect who built unusual houses, but everyone wanted ordinary ones. And they did not let him realize his talent. He will have a girlfriend...”

“And why "he will have a girlfriend"? What a sexism! Let the architect be a woman!”

“And she will have a girl”.

“Are you kidding? Almost 90 percent of our readers are heterosexuals and half of them are conservatives! No girls!”

“Okay. I will write a great romance. About the war, about peace, about Napoleon”.

“Good. How do you like this”, John paused to catch Mary"s attention. “ For sale: baby shoes, never worn”.

Mary was silent. John was waiting.

“And? What happened next?” She asked impatiently.

Without waiting for an answer, she flew out of the room, putting all her indignation into the slammed door.

“Good thing you"re beautiful,” John thought. But he mentally crossed out this phrase as sexism.

He turned to the computer and typed.

“Ernest laid the book on the swaying table of street cafe.

“ The text is a gun”, he said. “Words are the bullets. They have to hit exactly on target. Why are you trying to cut down a firing pin and pour out gunpowder? As a result you have a false shot, dime novel”.