LRT TV program “RUSŲ GATVĖ” traveled to Ukmerge to meet with the artist Akrolesta (Tatyana Sokolova), who moved to this city from Russia. Most of all, Tatiana values freedom and even refused to receive an art education, so that she would not be driven into an academic framework.

SmartArt, JazzArt, LightArt, RelaxArt, MiniArt. This is how the Akrolesta (Tatyana Sokolova), who lives in Ukmerge, defines the genre of her paintings. It is difficult to attribute her work to a specific artistic style. Rather, it is an impulse of the soul and an attempt to speak out on burning topics of modern society. Tatiana herself also does not like to drive herself into certain frameworks and standards, reserving the right to freedom of creativity.

“I think that art is a game and an experiment, but many people forget about it and begin to tell,“ the artist sighs. - This is a "pro-not a pro. These comparisons - they are constantly present in our life, and it sometimes seems to me that people walk with some kind of height meter, with some weights and a ruler. They measure who has bigger lips, who knows better. Comparisons all the time!

I want to have a space without judgment and comparisons. Really free space, because freedom is limited everywhere.

For me, art is freedom of speech! 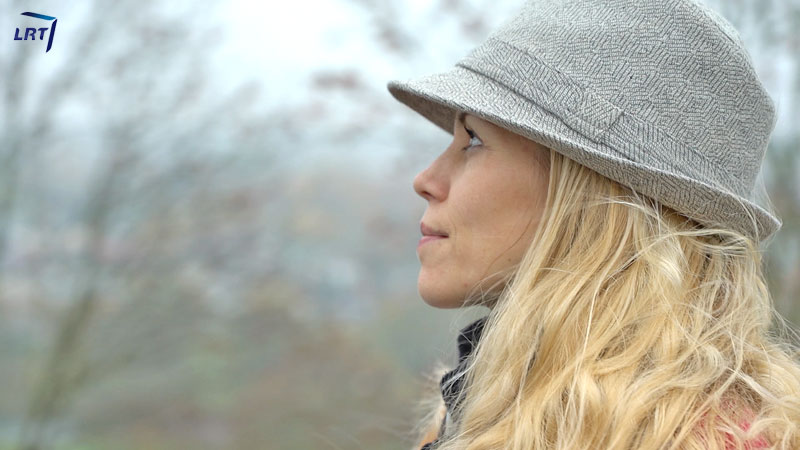 Tatyana Sokolova is from Cheboksary. She also graduated from school with a medal there. Then she graduated from the university. It was in the alma mater that she first developed an interest in the visual arts. It is curious that this happened at the Faculty of Philology of the Pedagogical University.

“There I got acquainted with World Art, because it was one of our specialties,” says Tatiana. - We had a wonderful teacher who spoke with inspiration about all the famous artists. She talked about the pictures with such juice, as if squeezing an orange . She was delighted with them, and she encouraged creativity in us. She was interested that we would not just talk about the artist, but try to somehow create something and tell, for example, about Chagall's work with the help of a board game. I liked this very much, because it was combined with my creative spirit and inner core. " 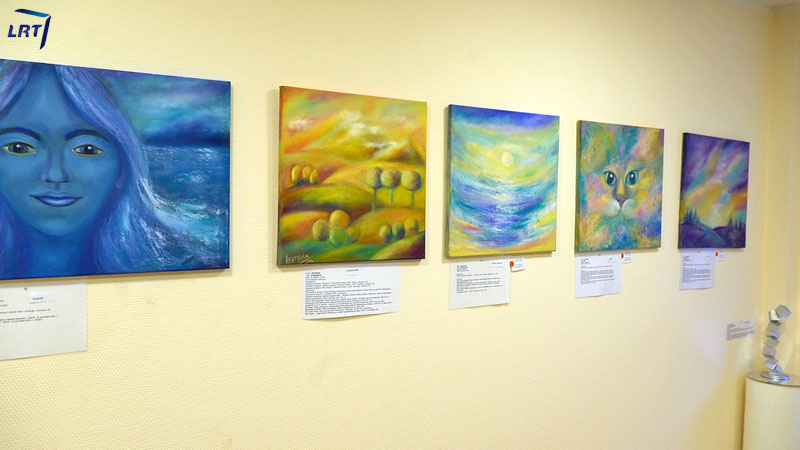 During one of their travels in Europe, Tatiana and her husband ended up in Ukmerge. The spouses from Russia liked the town. Here they decided to put down roots, and here their daughter was subsequently born. The change of environment and place of residence largely contributed to the fact that Tatiana herself took up the brush.

“Initially, it was an impulse of the soul,” the artist recalls. - All the time I was in some kind of framework: an apartment, everyday life, the framework of a wife, mother ... I wanted to get out of this and find something for myself, for the soul, when I am without all these labels. I went to an art school, but there were academic rules and stories about how I should live and what I should do again. Since I have lived like this for 30 years, I thought: enough is enough! My husband evaluates my borscht, children evaluate whether I am a good mother, parents - whether I made the right decision that I immigrated. Well, how much can you rate me? I believe that art is not for evaluation, it is not judged, and I want to create free alternative art". 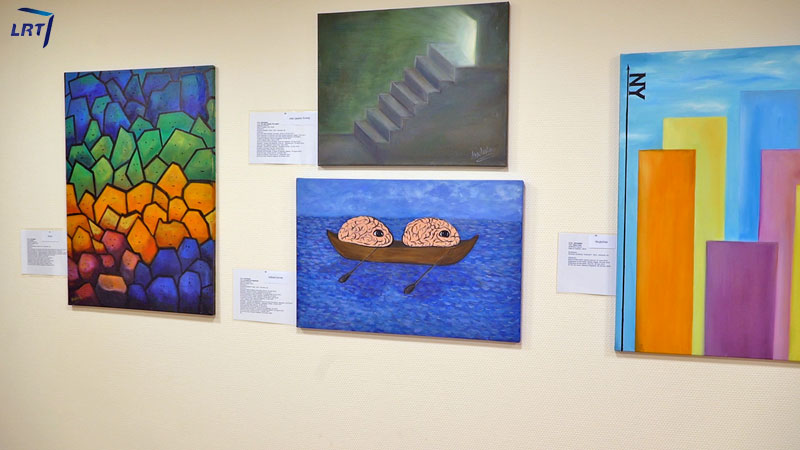 Tatiana Sokolova showed the program "RUSŲ GATVĖ" some of her works and enlightened how smart art differs from jazz art and other directions.

“Here are the pictures of the“ smart art ”series - the artist leads the film crew to one of the walls where her works are exhibited. - These are sometimes joke pictures, sometimes simple laconic statements. For example, here is a picture painted during the postpartum depression, when I realized that after childbirth a woman thinks only about milk. She is like a jug of milk, like a vessel that carries and nurses. In principle, she has no opportunity to think about anything else, so she is headless. As a result of my thoughts about pregnancy and feeding a baby, I got this picture of a woman-jug. " 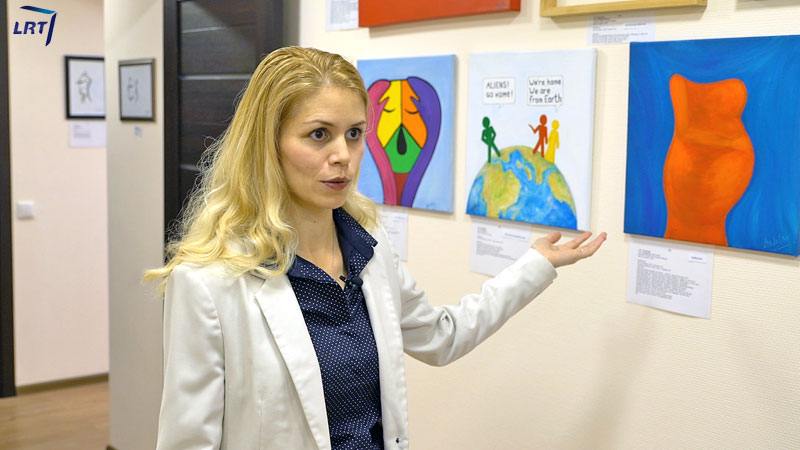 If SmartArt is based on the idea and emotion of the artist, then JazzArt is a conversation with famous artists, an interpretation of the work of great masters. In addition to SmartArt and JazzArt, there are also caricature drawings - statements on burning topics. How this is roughly expressed in practice, Tatiana tells by the example of discussions around feminism.

“For example, I watched the film“ Red Pill ”about feminism and about the fact that men's rights must also be protected. In fact, everything is not as simple as it seems. Feminists are not the only ones in need of protection. And I came up with a picture, which is a sketch for the "Feminism" object. This is about the fact that no one introduced feminism and no one canceled it. Because in my childhood there were many women with rolling pins and pans who threatened their husbands. And husbands were henpecked, and it seemed to me that feminism did not need to be defended at all, because women with fists did not go anywhere. They just sat in the kitchens and didn’t show their noses, and now they go out to rallies. And you need to protect both children, men, and everyone. Just defend human rights, not just one specific group. " 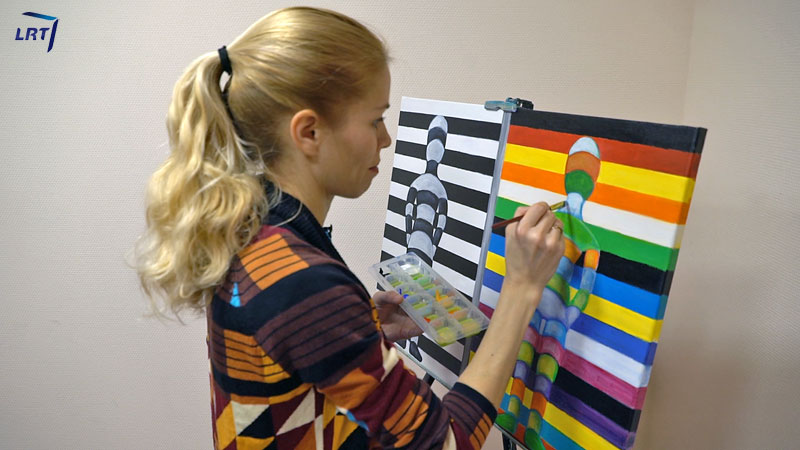 Tatiana Sokolova is not afraid to touch upon acute political topics.

“In the period of the situation in Ukraine, such a “green man ”was born,” she demonstrates one more work of hers. - This is an absolutely unpleasant person who has a colander instead of a head. His brains do not linger there, because there are just holes. A colander is a symbol of a helmet, a helmet full of holes. Nothing holds in his head. He's so green and unpleasant. And if a woman lives with such a person, then she ends up behind bars. She has a grid in her eye, and she herself is behind a lattice mentally and psychologically."

In addition to the artistic, Tatiana also has a small literary experience. She has published several children's books.

“I already told you that I have children, and they inspired me to create stories and poems on various topics. Therefore, I began to try myself in the genre of children's illustration".

For example, she wrote various short humorous stories about our cat and illustrated them herself.

"The book is printed in large print so that our daughter, when she was still little, could read various jokes about her beloved cat herself. She reads with interest what her mother wrote, ”says the author. 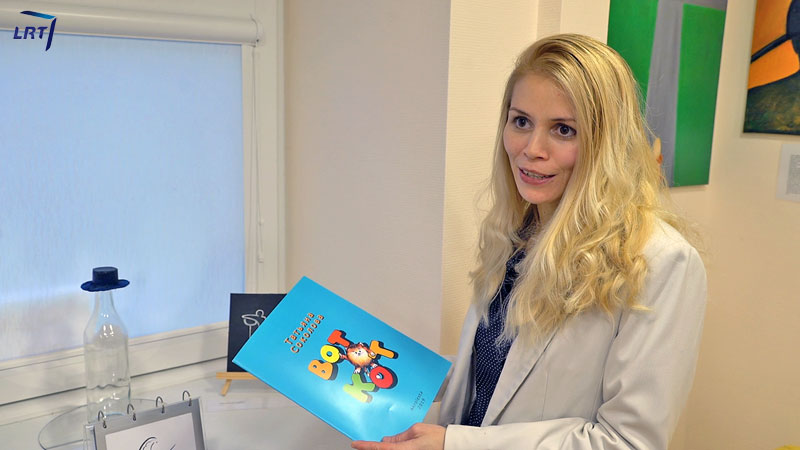 Tatiana and her family did not even think of moving to the capital of Lithuania. They just like the compactness and comfort of Ukmerge. In addition, the river and forests are within walking distance. Nature is what gives inspiration to the artist to a greater extent and gives birth to new paintings.

“Nature is where I rest and where I am filled with energy ... Walks, conversations with people who are important to me, with loved ones ... With people who give rise to new ideas, thoughts ... With my husband, with whom I can discuss something, generate ideas. Sometimes this is a brainstorming session, when, while communicating and discussing an article, book or news, we come up with a visual image and how to use it to tell people what is important to us. About our values, about things that should be protected and what to pay attention to in this world", - said the artist in the program "RUSŲ GATVĖ". 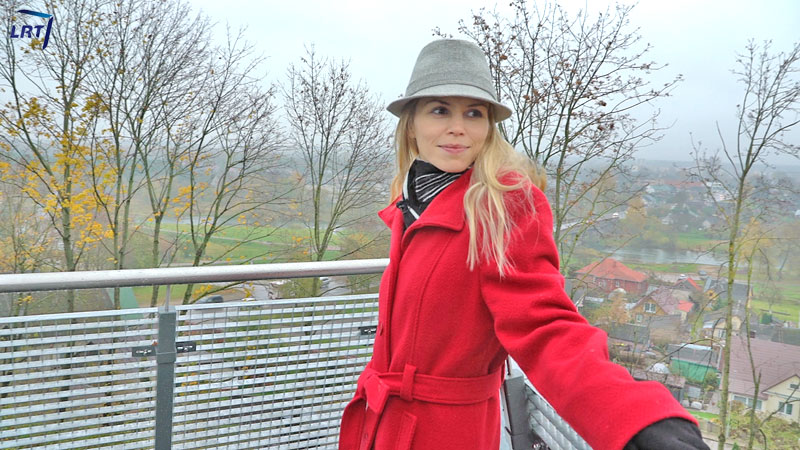