The World of Women

In 1961, a native of Kaunas, George Maciunas, created the Fluxus art movement in New York. Many of the famous contemporary artists have come under the influence of this cult movement.

Fluxus was born outside academic walls, just as Apple and Microsoft were born far from universities - in the garages of the founders.

Similar artistic spaces are gradually emerging in Lithuania, far from academism and the white walls of official galleries, but ready to open the doors for any artistic idea.

This summer, such a space was opened in Ukmerge. In full accord with the traditions of the avant-garde, it is called Menų garažas "Būk alternativa" (Art garage "Be an alternative").

The creators of the art garage - the famous Lithuanian basketball player Rima Petronytė Bražėnienė and the world-famous musician and composer Saulius Auglys - conceived this space as an independent platform, as a place where creative people can realize their ideas: concerts, exhibitions, performances, hold creative meetings and workshops.

Art garages are a very fashionable way of presenting contemporary art in the United States. Art garages of various shapes, sizes and surroundings appear in the 21st century from New Orleans to Wisconsin, from Denver to Richmond.

In art garages, any object can turn into art, and any sound can turn into music. This is a space for creativity, not limited by any framework. Well, except for the walls and the ceiling, perhaps. However, nothing prevents art from splashing out of the doors of the art garage onto the nearby streets.

At the same time, quite formatted concerts, masterclasses, circles and all kinds of activities for children and adults are held in art garages.

Art garages are also characterized by quite traditional art forms, such as art exhibitions.

For example, Menų garažas "Būk alternatyva" is currently hosting an exhibition of paintings, miniatures, objects and sculptures "The World of Women" by the artist Akrolesta. This is her third solo exhibition this year. The previous SmartArt and RelaxArt were shown in Kaunas and Vilnius in the spring and summer of 2021.

The space of Menų garažas "Būk alternatyva" is quite conducive to free informal creativity. It is already filled with paintings by several Lithuanian artists and musical instruments by Saulius Auglys. Rima Petronytė Bražėnienė plans to hold in this space not only music concerts and exhibitions but also informal meetings with interesting people, as well as acquaint guests with unusual wellness techniques. 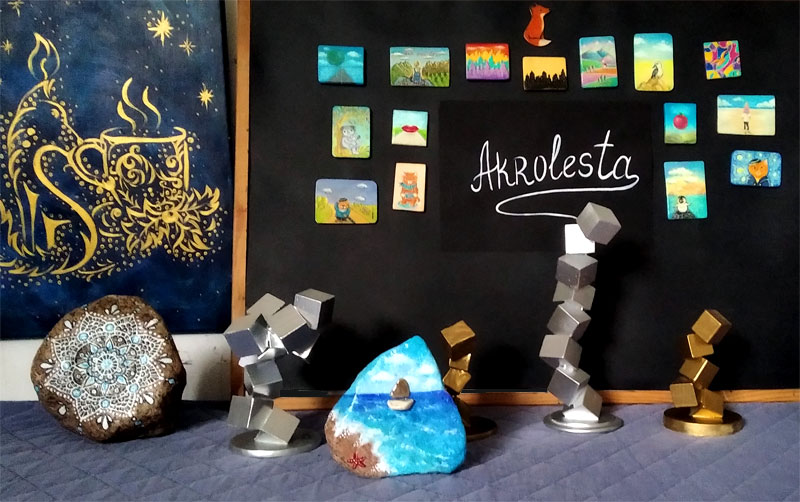