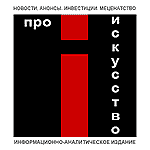 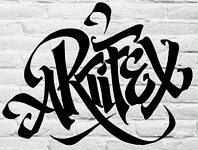 Akrolesta - symbols and allegories in the art of the 21st century

The art of Akrolesta is surrounded by a rather amusing mythology, which the artist herself calls “Pictures in line”. But artist is very careful with her private life. After all, creativity is not a keyhole and not a selfie.

Akrolesta says about herself:
“I"m from Earth. I do not live in the country in which I was born. My ancestors spoke a different language.”

We will respect the private life of the artist and talk only about her work. Among the works of prominent artists of the 21st century, the works of Akrolesta are distinguished by the extreme conciseness of the images with the maximum depth of expression. Her aphorism paintings about human values, about what concerns every inhabitant of the Earth.

For example, you can take at least her picture "Life on Earth". What could be visually simpler than an inflatable balloon on a string on a black background. However, this ball is our Earth. And we all live on this fragile ball, which can be easily pierced with a rocket fired by a mad general, or a man-made disaster resulting from the negligence of a lazy worker. Another example could be the painting "The Threat." Over the city flooded with sunlight, hangs a hybrid - an allegory of all the threats that have brought grief to people for centuries. The artist shows a religious symbol and a cruise missile that people on this land are threatened with violence, war and fanaticism. Threatened earlier, threatened now. 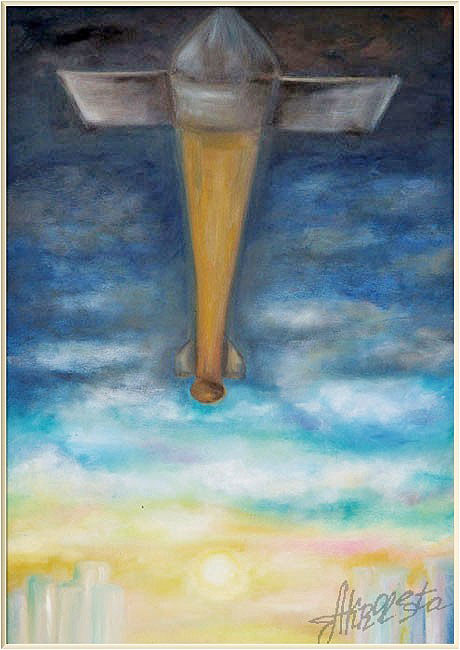 The allegorical expressions of the artist continues the painting “Journey of the Brain”. In spite of the seeming simplicity bordering on the poster, the painting is filled with several layers of meanings like good poetry.

Two brains row in one direction in the same boat across an endless sea. Just like a good family they combine their efforts and thoughts, create a life together. And at the same time, it is a brain drain, the flight of smart people from a dangerous world to a safe one. And of course, theese are immigrants that fleeing from another mad dictator. 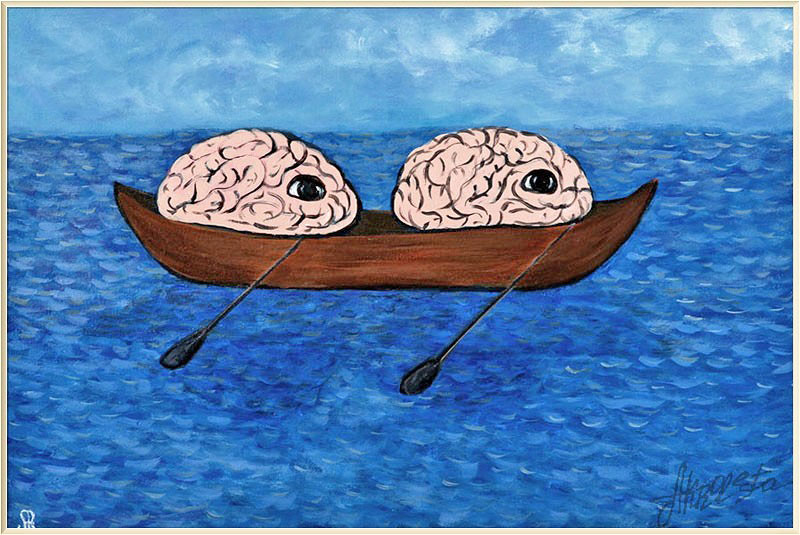 The poetry of the artist"s thinking can be seen in the painting “The Way”. Simple in execution, but deep in meaning.

We see on this canvas the conditional green field. Conventional gray road or maybe a cross. And a little girl, as a symbol of fragility, but at the same time the human resilience.

The girl is on a crossroad. She has a choice. Which path to choose? Gray, beaten, familiar and dull road or uncharted path?

And at the same time, the same symbolism tells us about the "cross" that women are forced to bear. And about the disproportion of this burden and their fragile shoulders. 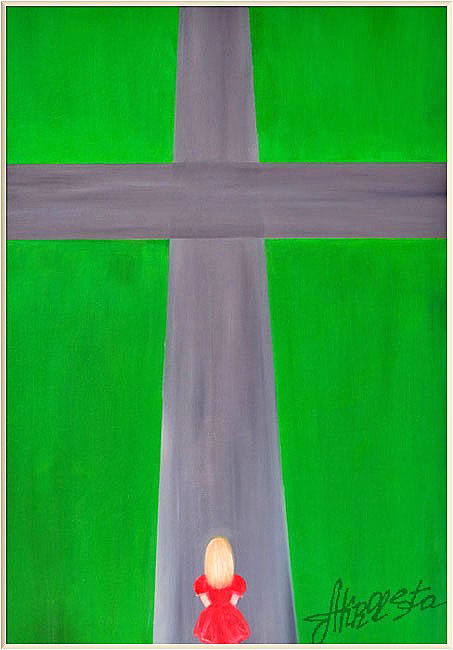 Allegories, akin to poetic, are most pronounced in the painting "Shining" (Hallo). Any spectator who has his own worldview and goals, consciously moving through life, will easily understand it at the level of feelings. This picture is as simple in composition and detail as the previous ones. Dark and dirty stairs. Whether the basement, or the entrance of an apartment building. And only in the upper right corner is a bright light. Radiance.

Whether it is just the light from behind the door, or the shining of the mind, or the divine light. One thing is clear. We have to go to the light, to the truth. 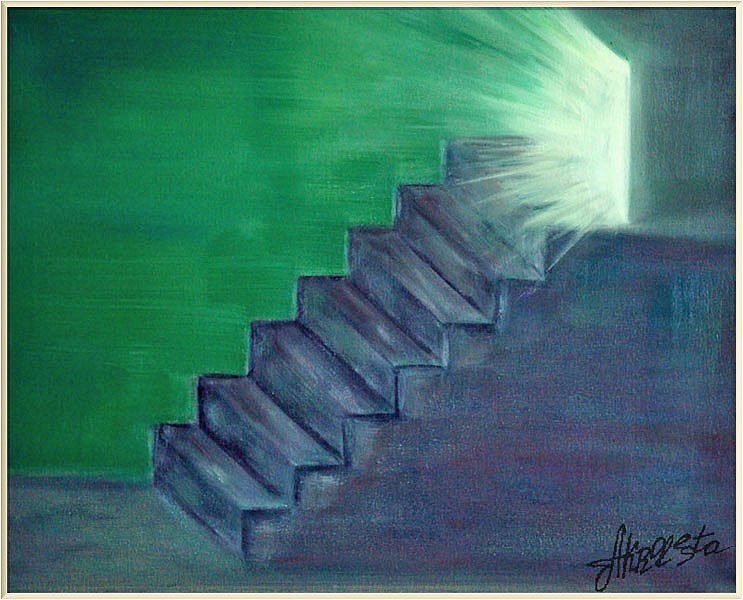 In 2019, Akrolesta announced on her website a global world art project I from Earth. The goal of the project is to unite cultures and people of the Earth. Akrolesta writes that the language in which people speak and write, personifies their culture, and the face of a person symbolizes the nation, tribe or people who created this culture.

The project of the artist thus symbolizes the unification of the peoples and cultures of all the inhabitants of the Earth.

The terms of the project are still difficult for an artist to name, since it is carried out on a voluntary basis, has no sponsors or state support. It all depends on how many people can learn about this project and agree to participate in it, sending their portraits with a sign "I am from Earth," written in their native language, says the artist.