In the beginning was… 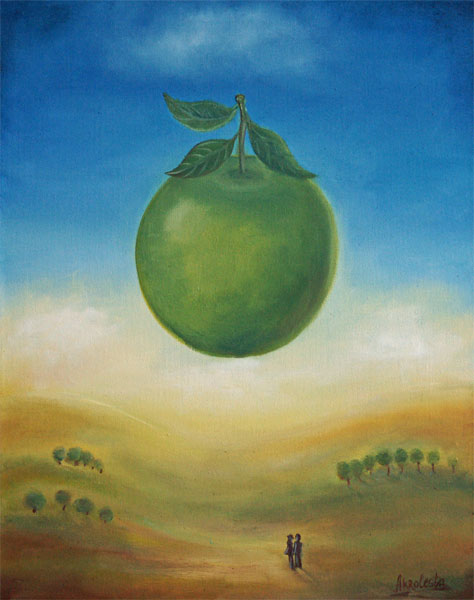 This painting has several alternative titles...
Newton's apple.
In the Gardens of Eden.
Adam and Eve.
Maslow's pyramid steps.
Gravity.

Despite the apparent simplicity, the picture has several readings, several meanings.
This is the Biblical motifs about Adam and Eve and the apple from the tree of knowledge, this is the Newtonian apple, which has become the basis of modern physics, this is the apple from Magritte's painting The Son of Man, this is Dali's surrealism with its objects hanging in the void. These are the steps of Abraham Maslow's pyramid of needs, from the physiological needs for food to
spiritual, aesthetic, the embodiment of which is the picture itself, painting, art, creativity.

At the beginning of Christianity, Judaism and Islam there was an Old Testament with a story about Adam and Eve and an apple from the tree of knowledge. Modern physics is based on Newton's laws, which, according to legend, are associated with an apple that fell in the garden of Cambridge University in 1666. At the origins of modern fine art are the works of Magritte and Dali. At the heart of modern psychology are Maslow's work on human motivation - the theory of the hierarchy of needs.