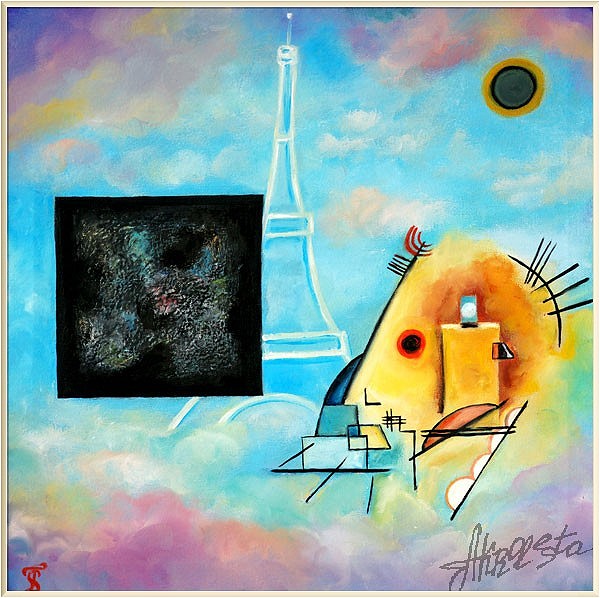 The first version of the picture

Kazimir Malevich was the founder of Suprematism and the author of the legendary painting "Black Square". Vasily Kandinsky well known by his geometrical abstract art. Both artists have worked in Europe for many years. The last years of his life Kandinsky spent in France.

"Kazimir Severinovich Malevich (February 23 1879 – May 15, 1935) was a Russian painter and art theoretician. He was a pioneer of geometric abstract art and the originator of the avant-garde Suprematist movement. He was a devout Christian mystic who believed the central task of an artist was that of rendering spiritual feeling.
Black Square (also known as The Black Square or Malevich"s Black Square) is an iconic painting by Kazimir Malevich. The first version was done in 1915. Malevich made four variants of which the last is thought to have been painted during the late 1920s or early 1930s. Black Square was first shown in The Last Futurist Exhibition 0.10 in 1915. The work is frequently invoked by critics, historians, curators, and artists as the "zero point of painting", referring to the painting"s historical significance and paraphrasing Malevich.
Wassily Wassilyevich Kandinsky (16 December 1866 – 13 December 1944) was a Russian painter and art theorist. He is credited with painting one of the first recognised purely abstract works. Born in Moscow. He taught at the Bauhaus school of art and architecture from 1922 until the Nazis closed it in 1933. He then moved to France, where he lived for the rest of his life, becoming a French citizen in 1939 and producing some of his most prominent art.
Kandinsky taught the basic design class for beginners and the course on advanced theory at the Bauhaus (1922-1933). The development of his works on forms study, particularly on points and line forms, led to the publication of his second theoretical book (Point and Line to Plane) in 1926. Geometrical elements took on increasing importance in both his teaching and painting-particularly the circle, half-circle, the angle, straight lines and curves. This period was intensely productive. This freedom is characterised in his works by the treatment of planes rich in colours and gradations, where Kandinsky illustrates his distance from the constructivism and suprematism movements influential at the time." (From Wikipedia)